Michael Hill has worked within the Superbike World Championship paddock for more than 15 years and is recognised by many as the face of the Paddock Show.

With experience presenting and reporting on two and four wheeled motorsports, 2013 saw Michael expand his already impressive services portfolio. Rider logo & identity design together with other promotional products were added to an already extensive list of media and promotion services for the motorsport industry and many riders / drivers took advantage.

In 2014, in addition to expanding his own MHP brand Michael became the official WorldSBK Paddock Show host and Podium TV Interviewer, as well as the host of the media events prior to each World Superbike Championship round. He also had the honour of hosting the official end of season gala award ceremony in Jerez, something he is particularly proud of. 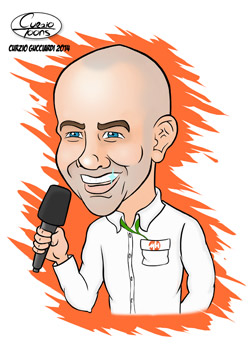 Michael continued this role in 2015, but with expanded responsibilities that saw him presenting a number of trackside video features and rider interviews as well as hosting the official pre-event Press Conferences, Paddock Shows throughout the weekend, and the end of season gala award ceremony. He also returned to commentating ‘live’ on the European Junior Cup races, broadcast around the globe.

2016 saw Michael develop his skills further becoming the co-ordinator and host of all fan activity within the Paddock Show of the Superbike World Championship whilst continuing to provide media and management services to riders within the MotoGP, WorldSBK, CEV and BSB paddocks.

A continuation of his role within WorldSBK for 2017 and 2018, Michael also worked within the MotoGP paddock during this time, hosting the main stage within the VIP Village for the Losail International Circuit in Qatar.

He joined the broadcast team for the MotoAmerica Championship in 2019, a role that he will continue alongside his World Superbike commitments in 2021. He was also invited to host the annual MotoFest at The Bend Motorsport Park in Australia, where in addition to hosting the main fan stage, he also commentated trackside on both the ASBK and ARRC Championship races.

Michael has hosted the WorldSBK Team launches for both the Kawasaki Racing Team (2019 & 2020) and Moriwaki Honda in 2019 and was asked to present the 2021 WorldSBK and World Endurance Championship Rider Line-ups for Honda.

Michael is also an accomplished author, having written the Official WorldSBK Yearbooks, published in English and Italian, since 2018.

He is proud to be associated with Two Wheels for Life and will host the annual Day of Champions at the British MotoGP for a third time in 2021.