Jayson Uribe signed off from his debut European Moto2 season with the AGR Team with a stunning 8th place finish in the season finale at Valencia.

The 2016 FIM CEV Repsol Moto2 European Championship has been exciting from start to finish with Uribe regularly amongst the leading points scorers.

Qualifying 13th at the Ricardo Tormo circuit, Uribe made one of his usual lightning starts to end the opening lap in 9th.

Maintaining a solid pace Uribe was involved in a race long 19 lap fight that eventually saw the American take the chequered flag 8th, a fraction behind the 7th placed finisher.

The result sets Jayson up nicely for 2017, when he will return to race for a second season with AGR, where he will use the experiences gained in 2016 to build upon 11th overall in the final classification.

7th place finishes at Valencia and Catalunya earlier in the year were the highlights for Uribe who continues to develop at a rapid rate. 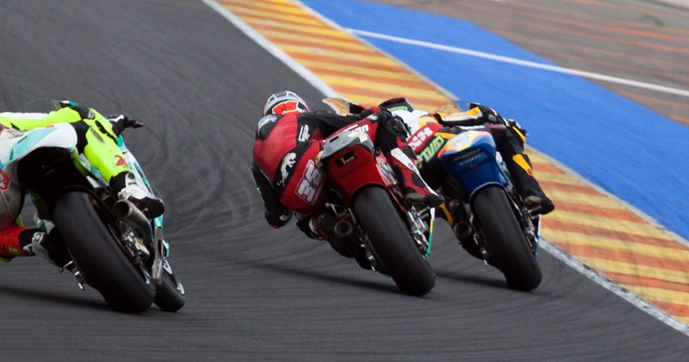 Jayson Uribe: “I had another fantastic round of the 2016 FIM CEV European Moto2 championship at Circuit Ricardo Tormo  yesterday. I had some mechanical problems in FP1, but FP2 brought a big step in both my riding and the bike set up. My AGR team worked hard to fix a small technical issue in Qualifying 1, and I was able to set my best ever lap time. 1.37.76, more than a second faster than my previous best. Warm up was a bit of a waste. The conditions were sketchy at best, with enough rain falling to make it hazardous with slicks, but too dry for rain tyres. I did three laps with a full rain set up and rain tyres, then pulled in. I had a great start in the race, going from 13th to 8th by the first corner. Got shuffled back to 10th where a race long battle ensued with myself and 6 other riders. 19 laps and countless bumps, blocks, and passes later, I ended up 8th. 0.2s down from 7th! I had a brilliant weekend with my AGR team and with all my friends and family who came to support me. I’m very satisfied with my performance this year, and I’m excited to get the ball rolling for 2017.”