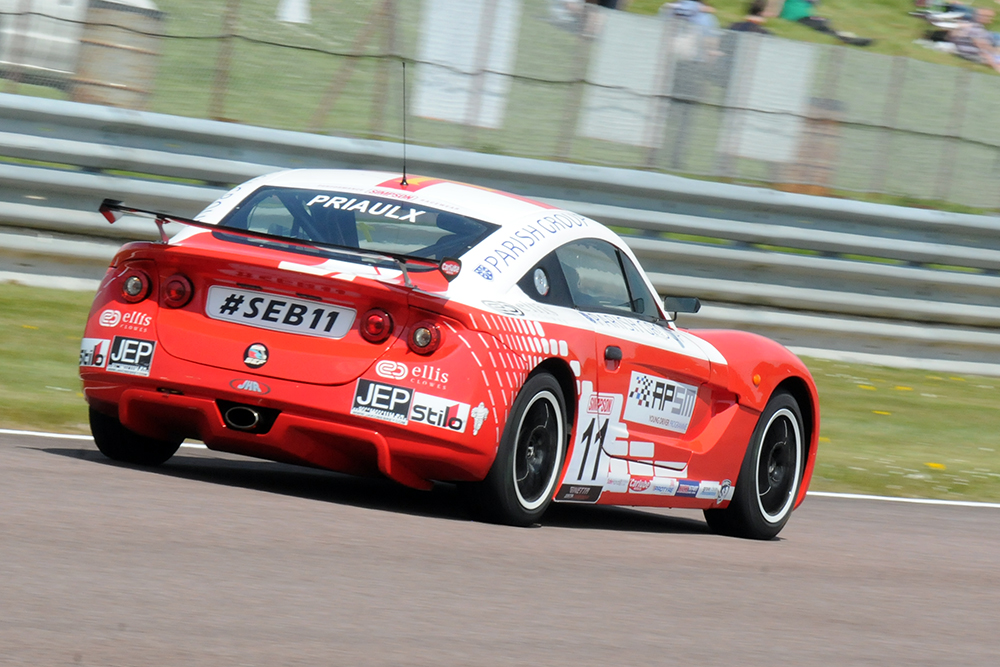 Full of confidence after his triple rookie podium finishes at the previous round at Donington Park, 15 year old Seb Priaulx continued his impressive climb towards the front of the Ginetta Junior Championship at Thruxton today, claiming 5th and 3rd overall in the day’s two 9 lap races at the ultra-fast Hampshire circuit and with it bagging a double ‘rookie’ win in the process.

Saturday saw Priaulx on track for two 15 minute sessions, the first being untimed ahead of the sole afternoon qualifying session. 10th in Free Practice, Seb improved his lap time by over 7 tenths to qualify on row 3, a superb 6th overall and top rookie for Sunday’s opening race.

Race 1 on Sunday was eventful but with Seb making a great start he was soon up to 5th and racing hard for the overall podium whilst leading from start to finish in the rookie category. By half race distance #11 was locked in a five driver fight for 3rd overall whilst maintaining his top rookie status. Crossing the line after 9 frantic laps, Priaulx was classified 5th overall, his best result of the year with the accolade of taking the win in the rookie classification, a mere 2.8s from the outright win. His position meant another 3rd row start (5th) for the second race which was televised live on ITV4.

Track conditions for race 2 were almost perfect but that didn’t stop an immediate safety car after an incident mid-pack on the opening lap. The 9 lap race restarted proper at the start of lap 4 with Seb holding 5th. Priaulx elevated himself to 4th almost immediately after an impressive opening lap at full racing speed before battling at the front until the flag. Dropping to 5th on lap 6 the teenager from Guernsey showed skill beyond his experience with an incredible move to retake 4th at the fast Goodwood corner. A lap later he was up to 3rd overall where he stayed until the end of the race, crossing the line a mere 0.6s from the overall win.

Today’s results move Seb into 8th overall in the 2016 Ginetta Junior Championship. He remains one of the leading ‘rookie’ drivers.

From a Priaulx family perspective it was a triple podium weekend with Seb’s World Champion father Andy claiming a maiden WEC championship podium for Ford at the iconic Spa circuit on Saturday.

Seb Priaulx – 5th + 3rd overall (1st + 1st rookie): “Qualifying went well, I was 6th overall and fastest rookie and just a tenth from Pole Position. I was happy as I did the lap on my own without a tow and on paper I was the fastest on track. I was on the outside but I felt good that I could race from there. Race 1 went great, a lot of defending but it was really good fun out there and I was really looking forward to race 2. Race 2 we had a safety car but I’m really happy to be with the top guys now. I made a move on King at Goodward which is a hard corner to make a move so I’m happy with that. Thanks to JHR for giving me a great car this weekend and we will move onto the next round and try and win outright. Thanks also to Parish Group and everyone who came to see me this weekend.”

The 4th round of the 2016 Ginetta Junior Championship takes place at Oulton Park in Cheshire on the 4th / 5th June.