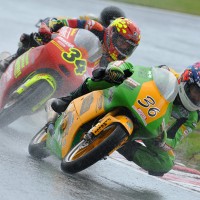 The 2014 BSB championship returned to the undulating Oulton Park circuit near Chester for the second time, but unlike earlier in the year the track was wet. Rain from hurricane Bertha began to fall moments after the day’s opening Superbike race meaning difficult and slippery conditions for the Motostar riders. 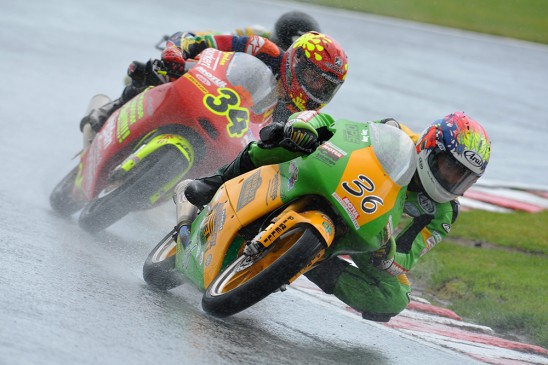 Having once again qualified on the second row of the grid in 4th, courtesy of a 1.47.2s lap time which was 0.7s faster than on his first visit in May, Jayson was a strong 6th in the damp morning warm up and confident of featuring at the sharp end when the race began. 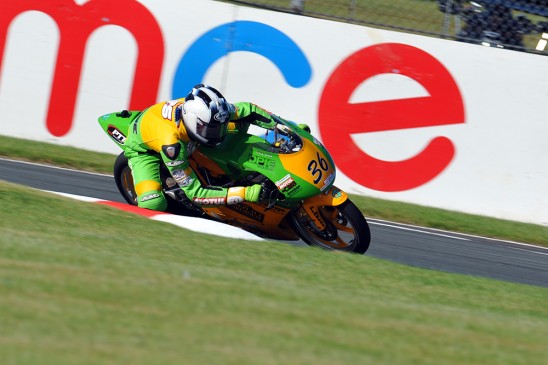 With the rain falling heavily as the riders lined up on the grid the decision to delay the start was taken, with the circuit deemed unsafe to race on given the vast amounts of standing water.

After a delay of 30 minutes the all clear was given and as the lights went out and the tightly bunched pack of riders headed into turn one, Jayson slotted into 7th, keen to avoid the plumes of spray that was being thrown up mid pack.

With the race now scheduled to run over ten laps Jayson rode sensibly in the opening stages ensuring he avoided any first lap carnage and with the leading eight riders pulling away set about challenging for another Moto 3 podium.

By half distance and with the rain falling steadily once again the already difficult circuit conditions became even trickier but Jayson was relishing the lack of grip and running confidently inside the top six. 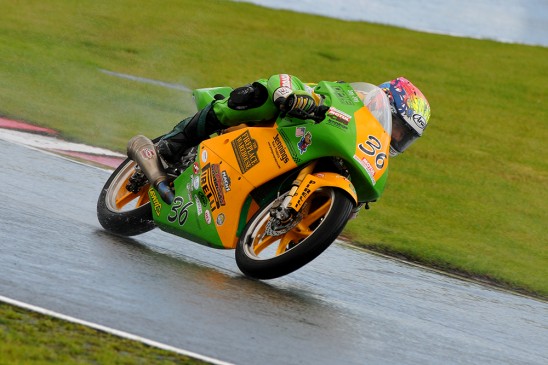 He was lucky to avoid the falling Charlie Nesbitt who fell in front of him at the Hislop chicane and with just three laps to go found himself locked in a titanic fight with Ed Rendell and Jordan Weaving for 2nd.

As the trio began their final lap they couldn’t be closer, and as the three went elbow to elbow Jayson found himself nudged back to 4th.

At the flag he was classified 4th overall but importantly for the championship he secured 3rd place and his fourth podium finish in the Moto 3 category of 2014 – extending his record breaking run of consecutive point scoring finishes in the process. 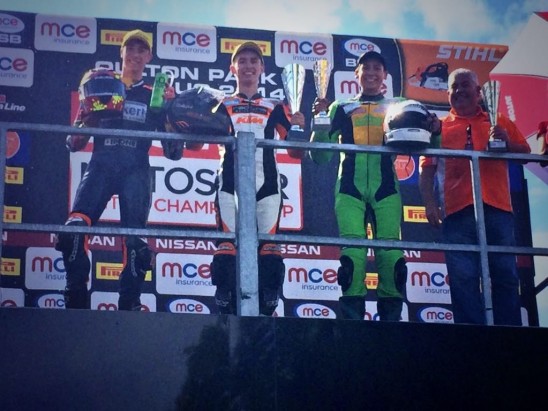 Jayson Uribe – FPW Honda: “I had a great weekend. It started well, we had some mechanical issues in FP2 but we worked through it and stayed towards the front. Qualifying was good, we made a few changes and were almost a full second faster than when we are at Oulton earlier in the year. Sunday brought the rain but luckily we had a wet warm up which was useful because the rain started again as we were about to start the race so on went the wets again and after a little delay off we went. I had a few moments in the race but finished 4th overall and the 3rd Moto 3. Thank you to everyone who continues to support me and has got me here! I am looking forward to the next race at Cadwell Park and to jumping the mountain on the Moto 3.”

Action photos courtesy of Ian Ward at Bikesportpics during qualifying and the race.