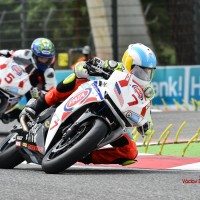 Alex Wisdom (CADS Racing) overcame a difficult couple of days to claim his third point scoring finish in as many races after a confidence building in today’s PATA European Junior Cup race at the legendary Imola circuit in Italy.

Wisdom, who struggled on the opening day to get to grips with the undulating and challenging nature of the track, had a further setback in final qualifying when he crashed on his second lap, leaving him 19th on the starting grid.

A great start and opening lap saw him move into the top 15 almost immediately but the lack of track time combined with riding with slightly dented confidence prevented the American youngster from progressing into the top ten as he had hoped. Nevertheless, today’s result will allow Alex to move onto Donington Park in a fortnight with the self belief that he can now score points on a consistent basis. The next objective is to improve in qualifying to give himself the best chance on race day.

Alex Wisdom – 13th position: “It was a solid race and I was glad to drop my times in the race. Of course it was a lonely race once and for sure I want to be battling in the top ten at least every week but this is more points and I know the areas that I need to improve both on and off the track. I can’t thank everyone who helped to repair the bike after the crash especially my dad. It was good to finish the race but I want and expect more at Donington Park.”