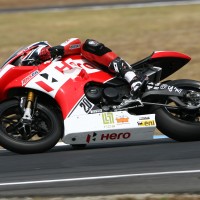 Team Hero EBR arrived at the picturesque setting of Phillip Island, Australia, (with no prior testing before their World Championship debut), and as such were hoping to make the most of the official  two day test ahead of the 2014 opening round, also held at Phillip Island this coming weekend.

Our riders Geoff May and Aaron Yates arrived down under with the added obstacle of never having ridden at the Australian, let alone the all new EBR 1190 RX.

Teething problems were of course to be expected, and after completing a total of 41 laps in the opening session, the number 20 and 99 EBR 1190 RX machines took no further part in Monday’s on track activity.

With the sun shining brightly this morning, and with the team having worked hard to find and resolve the small technical glitches everyone was relieved and satisfied with the outcome at the conclusion of today’s final four hour test.

Geoff and Aaron both significantly improved throughout the day as both man and machine adapted to the undulating circuit, located a couple of hours from Melbourne.

In the final session Geoff suffered a small crash but was able to make it back to the pits. Both riders then re-joined the circuit to complete another handful of laps before the chequered flag was waved.

With two days before official practice to evaluate the data gathered, Team Hero EBR is optimistic of a respectable result from their debut races within the World Superbike championship on Sunday. 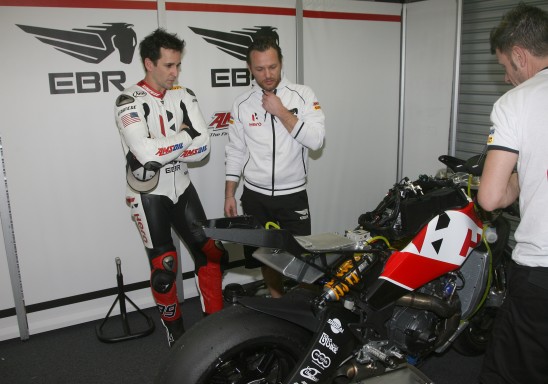 Giulio Bardi – Team Hero EBR Team Manager: “This is the first time that the bikes have turned a wheel on track. We had teething problems and we expected this but this is what testing is all about. Overall we are happy as we rectified the small problem that we had and both riders were able to improve. I am confident that we will continue to improve throughout Friday’s official practices and again by the time qualifying comes. We are looking forward to the opening races on Sunday and will do our best to achieve the best results that we can at this early stage in the season.”

Round 1 of the 2014 World Superbike championship gets underway proper with the first Free Practice session on Friday.