We are pleased to announce that Team Hero EBR will make the switch from the AMA Superbike series to the prestigious World Superbike championship in 2014. We will run a two rider team within in the main SBK class, running the new 2014 EBR 1190RX.

Riders Geoff May and Aaron Yates have been chosen to represent us and the EBR marque in our inaugural year of World Championship competition.

Giulio Bardi – Team Manager: “We are delighted to announce our plans to compete in the 2014 World Superbike championship. The entire team is excited and looking forward to the challenge ahead. Our riders Geoff and Aaron are both proven front runners within the AMA championship and will bring a wealth of riding experience to our campaign. We have a lot of work to do but when the lights go out for the opening race at Phillip Island in February, we will be ready.”

Both May and Yates make the move to the World Superbike series after a number of successful seasons in the AMA Superbike series. May, who is an accomplished AMA rider, has ridden the EBR machine in the states for the past two seasons claiming a podium finish at the Sonama circuit in 2012 on his way to 5th position overall in the rider classification. Yates, who has over 20 years racing experience, joined the squad for their 2013 AMA campaign finishing a respectable 8th overall in the final standings, one point ahead of May. 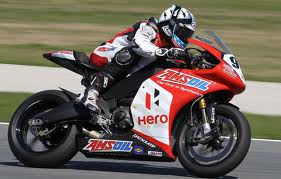 Geoff May – Rider: “This coming season is a new chapter for us and I can’t wait to get started. We know that we have a big challenge ahead of us but we are all ready for it. I am not expecting to be at the sharp end immediately but am confident of featuring inside the points consistently and springing a surprise or two throughout the year.”

Aaron Yates – Rider: “I’m delighted to remain with Team Hero EBR for 2014 and join them in moving to the World Superbike championship. There will be a lot of new tracks to learn and a lot of data to collect, but we have a strong team with competent personnel so I am confident and excited to head to Australia where Geoff and I should both have a strong chance of scoring points in both races.”

We are also pleased to announce the continued association between us and Hero MotoCorp Ltd, who will play a pivotal part in our being on the grid next year. Hero MotoCorp – headquartered in New Delhi, India – is the world’s largest manufacturer of two-wheelers in terms of volume units sold in a calendar year by a single company. Even in the midst of a highly-competitive market in India, Hero MotoCorp has retained clear leadership in the domestic motorcycle market with well over 50 per cent share, selling a total of over six million two-wheelers in the financial year 2012-13. On July 1st this year, Hero announced acquiring a 49.2% stake of Erik Buell Racing, and we are delighted to begin our journey into the World Superbike arena together.

Mr. Pawan Munjal, Managing Director & Chief Executive Officer, Hero MotoCorp Ltd said “We are delighted to be partnering with EBR at the World Super Bike championship this year. Hero is the first Indian two-wheeler brand to be associated with this event and this is also the debut year for Team Hero EBR at the World Superbike series. This is in perfect sync with brand Hero’s fast-paced global expansion into new international markets. I am sure it is going to be a lot of fun and we do look forward to some exciting times at the championships this year.”

The team will be run by Claudio Quintarelli.

Claudio Quintarelli – Team Owner: “Bringing together such prominent manufacturers as Erik Buell Racing and Hero Motocorp in this debut year of World Superbike racing gives me an incomparable satisfaction. I strongly believe in this racing project and my colleagues and I will be giving it everything in order to obtain the best results possible. I thank Erik Buell and the directors of Hero MotoCorp for putting their trust and faith in me.”

Erik Buell was the founder and former Chairman/Chief Technical Officer of the Buell Motorcycle Company. He is a pioneer of modern race motorcycle technology as well as the founder of Erik Buell Racing and the new EBR motorcycle brand. We are delighted to be able to bring Erik’s passion onto the world stage. Former racer Buell has himself competed against some of the greats in the past, and is equally excited and optimistic about our challenge ahead.

Erik Buell – EBR Motorcycles: More than three decades of racing, engineering, and manufacturing experience goes into every EBR motorcycle. The EBR 1190RX has some very unique engineering technology, and how to optimize this for each race series is something that takes time to learn. With the winter testing ban in effect until January, 2014, we will have to wait until pre-season testing recommences to see where we are in terms of current pace and performance. Nobody is expecting podiums, but one thing can be guaranteed, we will be hard at work learning and improving. When the contenders for the 2014 World Superbike crown line up on the grid for round 1 in Australia, be assured our riders Geoff and Aaron, along with all of our team personnel and sponsors are intent on the long term success. We are confident EBR will bring a fun and exciting storyto the series, and know the results will come.

Team Hero EBR are proud to field the first American motorcycle to contest the World Superbike championship and proud to have 2 American riders to help us.

We will launch our all new and fully interactive website along with our livery in due course.