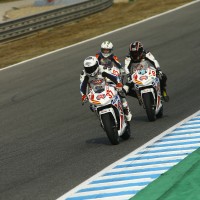 Spanish riders have dominated the final PATA European Junior Cup qualifying session of the season at Jerez with four riders inside the top 5!

With a second covering the top eleven on the grid for tomorrow’s 8 lap finale, the eventual Pole Position went to local rider Augusto Fernandez who clung on in the final moments to take his first ever Pole Position, ahead of Honda Spain’s wildcard entry Mika Perez who is riding the CBR 500cc RR Honda machine for the first time this weekend. Italian Michael Canducci was filling in the Spanish sandwich in 3rd position ahead of  Illan Fernandez and Javier Orellana and Swede Jesper Hubner who will complete the second row.

Josh Harland (Great Britain) was fastest yesterday but could only manage 9th today. Miguel Aranda (Spain) and Peter Sebestyen (Hungary) will join him on the 3rd row  tomorrow, in 7th and 8th positions respectively.

Of the championship contenders, Britain’s James Flitcroft tumbled early in the session but was able to remount, eventually qualifying 13th, while championship leader Jake Lewis could only manage 14th. Robin Anne (France) also struggled, ending the session in 22nd position.

Female riders Sabrina Paiuta (Brazil) and Amelie Demoulin (France) once again were right in the mix in 16th and 26th positions respectively.

The championship deciding race is scheduled to take place before the 2nd World Superbike race tomorrow afternoon and if the first two days of competition are anything to go by, all we can predict is uncertainty of the final result!