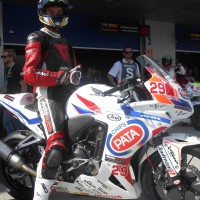 Jake Lewis has given himself a lot of work to do in tomorrow’s PATA European Junior Cup finale after qualifying 14th on the grid for the 8 lap encounter.

To add insult to injury, the talented Kiwi, who is defending a slender 4 point advantage, saw his closest rival secure pole position in a qualifying session that saw less than 2 seconds covering the top nineteen riders on the grid.

Lewis is still confident however and is keen to show his true potential after showing a consistently fast pace despite the lowly position.

Jake has shown throughout the season that he is not averse to fighting hard and with the standings so close nothing less than a podium will do so we can expect fireworks when the lights go out tomorrow.

Jake Lewis: “We are ok for tomorrow. Of course starting 14th makes it harder but we will be ok and we will fight to win and what will be, will be.”

The race is due to start before the final World Superbike race of the season and should play out in front of a record crowd who will be crammed into the Jerez circuit from the earliest opportunity.