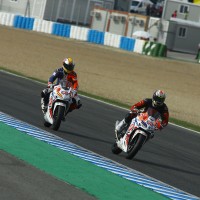 Jake, who arrives in Spain with a 4 point lead knows that he the outcome of the championship is all down to his performance this weekend and with 9 riders still capable of taking the title, nothing less than a win will do.

There are of course a number of scenarios that could affect the final standings but Jake is only focused on winning, which is the correct thing to do in a championship where 14 riders can take the race win.

Yesterday’s opening session gave Lewis the opportunity to focus on machine set-up and especially the overall gearing of his Honda CBR 500cc RR machine which could be critical come the race on Sunday given the technical nature of the Jerez circuit.

His closest championship rival was also running at the sharp end which ensures a nail biting qualifying session this afternoon.

With a Pole Position and front row qualifying positions already secured in 2013, it would be a brave man to bet against another front running performance when it counts later today.