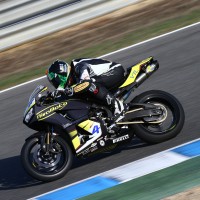 The Rivamoto team had a tough day at the office during the final round of the World Supersport championship in Jerez, Spain as Jack Kennedy and Edik Blokhin qualified their CBR600cc Honda machines in 20th and 32nd positions respectively.

Kennedy, who currently lies 6th overall in the standings ahead of the final race tomorrow has been chasing set up all weekend, and is now looking for some overnight fix to allow him challenge strongly in tomorrow’s 20 lap race.

The weekend looked to be going in the right direction after the opening Free Practice session on Friday but after struggling to achieve the optimum set up the Dubliner finds himself on row 7 of the grid.

Despite the lowly position, the whole team are optimistic that some solutions can be found overnight and are looking forward to ending the season on a high tomorrow in front of what is expected to be a record crowd for the season finale. 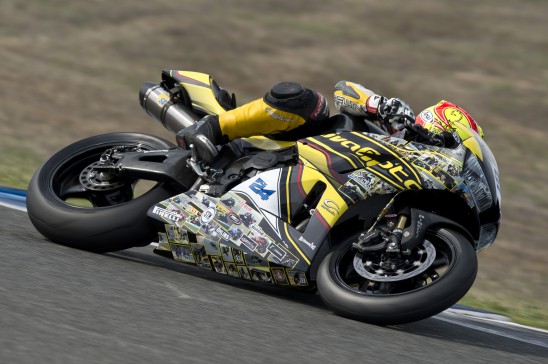 Jeremy McWilliams – Team Manager: “We have had a bit of an uphill struggle all weekend, and haven’t really moved forward in 4 sessions. Jack’s not sure why, and their is nothing that we can put our finger on which will give us a quick fix. We need to think overnight about how we can get Jack where he needs to be. We’ve done it before so let’s see what tomorrow brings.”

Jack Kennedy – “We tried everything but it just wasn’t to be today. I felt like I was on the limit but no times were coming which is the most frustrating thing. Hopefully we can find some confidence in warm up and end the season strongly.”