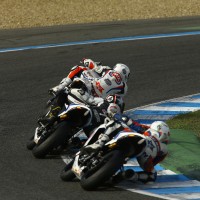 The sun continued to shine in Southern Spain as the 32 riders contesting the final round of the 2013 PATA European Junior Cup took to the Jerez circuit earlier today for their first free practice session of the weekend.

Fresh from his maiden pole position of the year last time out in France, Brit Josh Harland once again topped the timing sheets ahead of local rider Augusto Fernandez who took the actual victory a fortnight ago at Magny-Cours.

James Flitcroft (Great Britain), now lives in Spain and was in high spirits after snatching 3rd late on in the session ahead of the current championship leader, Kiwi Jake Lewis.

Illan Fernandez made it into the top 5, while Hungarian Peter Sebestyen ended the session in an encouraging 6th position.

Italian Michael Canducci still has an outside hope of the overall title and he headed next bunch of riders in 7th, ahead of Richard Bodis (Hungary), Kevin Manfredi (Italy) and Javier Orellana (Spain) who completed the top ten.

Female competitor Sabrina Paiuta proved that 6th place last time out in France was no fluke with another strong performance in 13th. Amelie Demoulin (France) rode her Honda CBR 500 RR to 30th position.

Official qualifying takes place tomorrow afternoon and with a possible rain shower predicted in the local area, anything can happen.