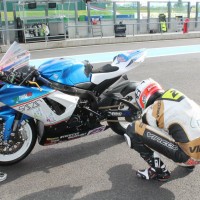 Italian Alex Baldolini battled hard once again to claim a solid 10th place finish in the penultimate round of the World Supersport championship in France on Sunday.

Despite not having any machine updates since Donington, the hard charging likeable Italian, who finished 6th in last year’s World Supersport championship continues to push hard on a machine that is still in development.

Qualifying 12th, Baldolini was pleased that the race was dry as both he and his Suriano team had worked hard throughout the weekend to find a setting that allowed the rider to push hard in the corners. This was essential given the speed deficit of the Suzuki supersport machine.

Nevertheless, Baldolini made a good start and some aggressive moves in the early stages to remain in touch with the leading bunch of riders and after breaking clear of Jack Kennedy, Raffaele de Rosa and Massimo Roccoli claimed a well fought 10th position, his second best result of the year.

Alex Baldolini – 10th position: “We scored more points here in Magny-Cours, but in this moment it is difficult. We need more power and acceleration with the Suzuki, the bike is still the same as when I began riding it at Donington. We didn’t get new parts so the results are the best that we can achieve right now. However the team worked hard and we made a really good setting which works really well in the corners. I want to be closer to the top so it’s a pity that we don’t have updates for the bike because I am sure we could easily fight for the top 6 but we will go to Jerez and do our best once again.”

The final round of the World Supersport championship sees the riders and teams set for battle at the Jerez circuit in Southern Spain in a fortnight and with the circuit renowned for close battles and relying on riders carrying high corner speed the scene could be set for Baldolini to claim his best result of 2013 in the season finale.