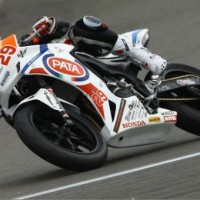 Jake Lewis managed to cling on to his narrow 4 point lead in the latest round of the PATA European Junior Cup despite failing to finish the penultimate round of the championship at the Magny-Cours circuit in France.

Lewis who has won two races so far this season, was confident of another strong showing aboard his CBR500cc Honda machine after qualifying in 4th.

As in recent races, the rider from New Zealand soon eased his way into the lead, and looked comfortable fending the attacks from his rivals at almost every turn.

As the race neared the halfway point and with Jake still commanding things at the front an incident involving Guillaume Raymond and Kevin Manfredi resulted in Lewis being thrown to the ground after being collected by two of his championship rivals.

With the rule in the championship being that ‘a rider must return to the paddock area aboard his machine within 5 minutes of a red flag situation’ being enforced and with Jake returning just after this period, it meant a tense time watching the television screens for all concerned as the race was restarted over a shortened 5 laps.

After a series of further incidents, the race was eventually won by Spaniard Augusto Fernandez, but in a bizarre twist none of the top four riders in the series were able to score points ensuring that Lewis will arrive in Spain with his 4 point lead in tact.

Jake Lewis – Championship Leader: – “I am really disappointed as once again I was in great position and the outcome is that I am collected by someone else who clearly wasn’t thinking. I have been lucky with the way the race went for my rivals so in Spain I will be racing to win and taking no prisoners!”