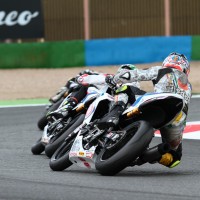 The penultimate round of the PATA European Junior Cup lived up to its reputation after a titanic battle which raged until the final lap saw Augusto Fernandez, Peter Sebestyen and Javier Orellana finish on the podium at the end of a shortened 5 lap race.

The race, which initially started after the World Supersport race was stopped on safety grounds following an incident involving Guillaume Raymond (France), Kevin Manfredi (Italy) and the unfortunate Jake Lewis who was collected in the crash.

At the restart championship leader Lewis and his two closest rivals Robin Anne and Guillaume Raymond (both from France) were unable to take part meaning a tense time for the Kiwi who was watching from the pit lane.

Sebestyen (Hungary) looked like he was going to win by a margin but as is usual with the EJC, the swarming pack of CBR500cc Honda machines soon closed ranks, ensuring the enthusiastic fans were treated to a thrilling final 2 laps.

James Flitcroft (Great Britain) and Hannes Soomer (Estonia) crashed on the final chicane leaving Valter Patronen (Finland) who was wildcarding this weekend to finish 4th ahead of Swede Jesper Hubner and female competitor Sabrina Paiuta from Brazil who claimed a superb 6th.

Today’s result leaves the top two positions overall unchanged with Lewis still holding the advantage with 76 points, four ahead of Robin Anne. Fernandez’s victory moves him to 3rd only 5 points behind the leader as the championship moves to the season finale in Jerez, Spain in a fortnight.

Augusto Fernandez: – “I am very happy for the result. It’s my first victory and was a great fight. The next race in Jerez and I will do my best to win again in front of the local fans.”