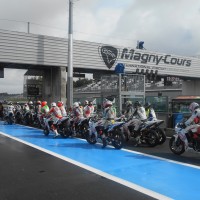 Britain’s Josh Harland has secured Pole Position for tomorrow’s penultimate round of the PATA European Junior Cup powered by Honda at a very wet Magny-Cours circuit in France.

After yesterday’s dry session the full grid of talented youngsters were looking forward to improving the circuit best lap even further but overnight rain saw a number of surprises and a number of championship favourites taking a cautious approach in the tricky conditions.

The rain had actually stopped as the session began, but the conditions were still very difficult and within the first 5 minutes, several riders including those in 2nd and 3rd positions in the overall standings tumbled out of contention.

Harland however was fast from the off and was never headed in a session that was cut short for safety reasons following several more accidents, including one in which the rider concerned attempted to return to the paddock, leaving a trail of oil around the circuit.

Championship leader Jake Lewis (New Zealand) was improving at the time the red flags came out but will start tomorrow’s race from the second row in 4th alongside James Flitcroft (Great Britain) and Italian Kevin Manfredi who was able to take part after some great work by his crew to repair his machine from a tumble yesterday.

Frenchman Renald Castillon, the second wildcard rider continues to adjust to the CBR500cc Honda machine with a fine ride to 13th whilst the closest rider to Jake Lewis did not complete a flying lap after falling and will therefore start 29th on the grid tomorrow.