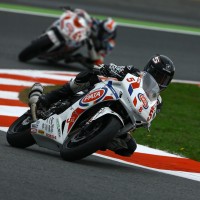 After a gap of several weeks, the riders competing for the PATA European Junior Cup powered by Honda re-joined the World Superbike paddock for the penultimate round of the championship at the Magny -Cours circuit, France.

The championship is one of the closest in terms of riders still in with a shout of taking the title, so with 14 riders still mathematically capable of winning, this weekend’s race promises to be closer than ever, if that’s at all possible!

Today’s free practice session gave the group of talented youngsters their first glimpse of the technical French circuit, although for some it was a refresher, given their competing in 2012.

The session was initially headed by Guillaume Raymond who looked unstoppable for the majority of the session. The flying Frenchman dropped to second for a matter of seconds, before retaking the top spot.

Hannes Soomer (Estonia) left it until his final lap to leapfrog Kevin Manfredi for second position overall, the Italian then falling without injury in the closing minutes.

Augusto Fernandez was the top Spaniard in 4th position, a fraction ahead of the current championship leader, Kiwi Jake Lewis.

All riders should be back on track tomorrow for official qualifying which is scheduled to run at 1330 local time.