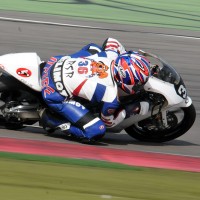 Rock and Sons Honda rider Jayson Uribe proved once again that is a talent to watch as for the second race in a row, he overcame a series of issues to secure an impressive 11th place finish in the latest round of the BSB Motostar 125cc championship at Assen in the Netherlands.

Uribe’s result ensures that the American teenager is the only rider in the championship who has scored points in every race, an impressive statistic given the depth of field and that Jayson is racing on unfamiliar tracks.

The Assen event began with a visit to local exhaust manufacturer, Samba, where Jayson was introduced to the legendary man himself and given the opportunity to look at some photos of the previous top riders that he had helped, including Max Biaggi and Valentino Rossi.

In the first official timed session, Jayson was one of many who fell at the final chicane, thankfully without injury. The damage was cosmetic and the team were soon looking ahead to the final qualifying session and although no improvements on lap times were made in this session, Jayson and the whole Rock and Sons team were optimistic of another fighting performance on race day. 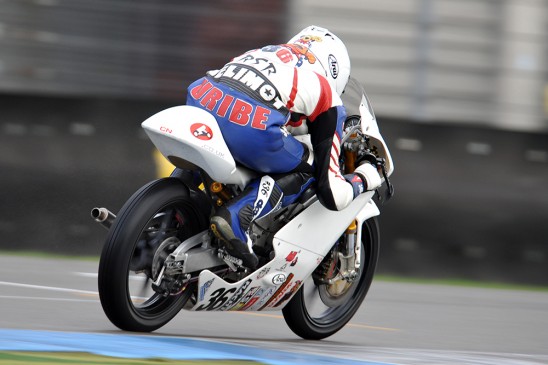 The morning warm up session started well but then more technical gremlins meant another stressful few hours as Ian Emberton had the task of rebuliding the engine with a standard cylinder for the race.

Starting 30th Jayson made an average start but in his usual attackign style was soon well inside the top 25 and in a frantic battle which raged until the flag.

The field at Assen was larger than usual as the BSB Motostar race included riders from the Dutch championship meaning even more competition and more opportunity to learn.

At the flag, and after one of the toughest races of the year Jayson and the team could reflect on another great result and be satisfied that they are now equal 10th in the British championship. Not a bad effort for a small family team! 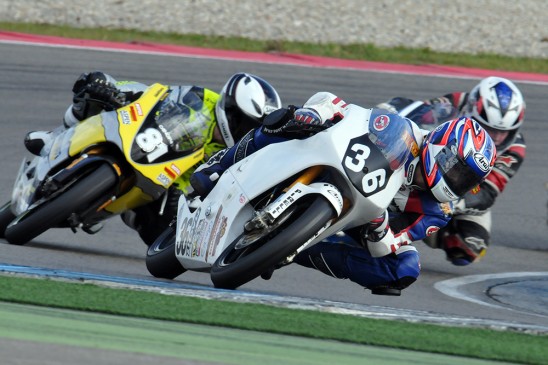 Jayson Uribe – 11th position in the BSB Motostar 125cc race: “The entire race was a constant battle between me and 5 other riders. All 5 would haul past me on the straights, but I would barrel into corners and get back as many positions as I could. There were several times where I made contact with other riders, but we all rode safe and smart. I ended up finishing 23rd overall and 11th in my class. I want to thank the entire Assen facility for hosting this race and to all of the personnel who helped. One comical moment came from a Dutch corner worker after my crash, who had helped me off the track. “You okay?” He said. “I’m okay” I replied. “You do backflip” he told me, “you land on face”. We both just laughed and shook hands.”

The penultimate round of this year’s championship takes place at Silverstone in a fortnight.