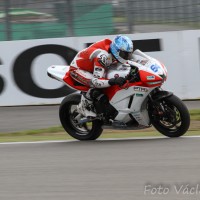 With 2 rounds remaining of the 2013 World Supersport championship, Australian youngster Matt Davies has parted company on good terms with the PTR Honda squad.

Davies, who was a noticeable absentee at the recent Turkish event, is now exploring other options which should hopefully see him able to complete the season, his first since progressing the world stage.

At 17, Davies is the youngest ever full time rider to contest the World Supersport championship, and despite his lack of experience at this level has impressed a number of major teams in his debut season, narrowly missing out on a points finish on more than one occasion.

Matt would like to take this opportunity to thank everyone who has supported him so far this year.

More news on Matt’s next steps will be made public in due course.