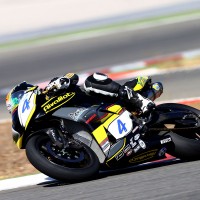 After a difficult opening day at the Intercity Park circuit on the outskirts of Istanbul, Turkey yesterday, the Rivamoto team of Jack Kennedy and Edik Blokhin were all smiles as with the sunshine came another potential for a strong qualifying performance for the Russian team.

This morning’s free practice session was held in unexpected damp conditions, but a red flag with 18 minutes to go provided time for conditions to improve enough for both Jack and Edik to improve their times from yesterday.

6th in free practice, Jack Kennedy was full of optimism as the claxon signalled the start of the final qualifying session ahead of tomorrow’s 16 Lap race.

The team had worked hard overnight with a routine engine change and new chassis settings to suit the ever changing track conditions. The changes made were positive, and Kennedy immediately elevated himself into the top 12.

Half way through the session and with Jack now 18th on the provisional grid, the team continued to work on improving things and in his usual last 6 minute attack Kennedy went back out on track for a final push.

Things looked to be working out perfectly as Jack elevated himself up a few positions on his first flying lap. With 3 minutes left and with Kennedy on yet another personal improving lap, the red flags came out after Fabien Foret joined the list of fallers.

The organisers decided to run the final minutes, meaning just one flying lap for the hard charging Rivamoto riders.

Once again rising to the pressure Kennedy improved to secure 13th on the starting grid while team mate Edik Blokhin also produced his best lap to improve to 32nd. 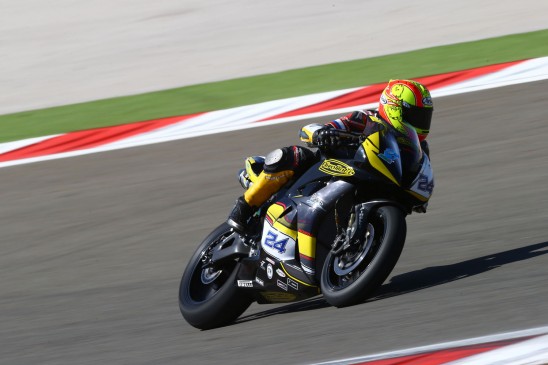 It could be argued that circumstances out of the team’s control prevented a higher starting position for Jack, but with the lap times so close, tomorrow’s race looks like being one of the most exciting races of the year; and given the performance from the Rivamoto team throughout the weekend, another strong race finish is absolutely on the cards.

Jeremy McWilliams – Team Manager: “It’s been an unpredictable day with changing grip levels and with all the stops and starts we didn’t manage to capitalise on a perfect starting position. The track is quite technical and the set up changes significantly as the riders get faster throughout the weekend. We made some bigger changes for Jack and he has good potential here if he can get away with the front bunch. We are all confident that he will impress and both bikes are working well.”

Jack Kennedy – 13th on the grid: “I’m still trying to get to grips with the place and find a perfect set up with a track that feels like it changes every session. We keep improving, but unfortunately so does everybody else. We were Sixth in the second free practice session and then improved again by 0.5 seconds but I still ended slipping back to 13th in qualification. It is going to be a tough fight tomorrow but I’m up for it!”