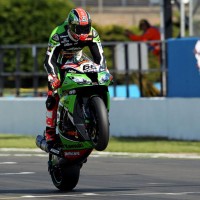 Following the decision taken by the FIM Stewards at Race 2 of the FIM Superbike round held on 12 May
in Monza (ITA) and counting towards the 2013 FIM Superbike World Championship to cancel the drop of
position sanction imposed by the Race Direction on rider Tom Sykes (Kawasaki Racing Team), the
Aprilia Racing Team and rider Sylvain Guintoli lodged an appeal with the FIM CDI.

The CDI held a hearing in the case at the FIM headquarters in Mies (Switzerland) on 16 July 2013. The
parties and their representatives were duly heard.

The CDI in the person of Sole Judge Mr Jan Stovicek (Czech Republic) rejected the Appeal lodged with
the FIM International Disciplinary Court (CDI) by Mr Sylvain Jean-Baptiste Guintoli and Aprilia Racing
Team against the decision of the FIM Stewards taken on 12 May 2013.

The CDI noted that there was no infringement of the FIM Superbike Regulations by the Rider Tom Sykes
when he left the track at the entry to the “La Roggia” chicane as he used the route indicated and
returned to the track at the prescribed spot.

The CDI found that the results of Race 2 of the Round in Monza (12 May 2013), counting towards the
FIM Superbike World Championship for Riders and Constructors, are definitively confirmed as follows:

The full reasoned decision was notified to the parties today and will be published on the FIM website in
due course.

The result means that Sykes is leading the World Superbike Championship by a single point ahead of this weekend’s Turkish races.