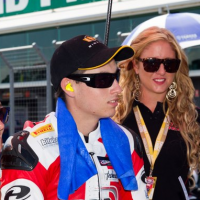 The youngest full time rider in the championship has returned to his native Australia but will return to the series in Magny-Cours.

His place has been taken by fellow Austrlian Damian Cudlin.

Matt has had an encouraging first season within the World Supersport championship, learning a lot and narrowly missing out on point scoring finishes on a number of occasions.

Matt wishes to thank everyone who has helped him this year, and would like to thank his platinum sponsors for all of their support and is looking forward to returning to the track for the final two rounds.