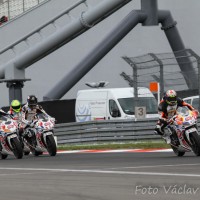 Pole Sitter and championship leader Jake Lewis was unlucky to miss the podium for the 4th time this season, finishing a confident 6th in the latest round of the PATA European Junior Cup powered by Honda at the Nurburgring, Germany.

The race was initially delayed following incidents in the earlier World Superbike race but thankfully the conditions were almost perfect when the rescheduled 8 lap race final got underway at 1635 local time yesterday.

Lewis made a typically impressive start from the front row of the grid slotting into 2nd at turn one before hitting the front half way around the opening lap.

With the leading group of 5 piling on the pressure, Jake rode what was in many people’s opinion the best race of his European career, as he fought back almost instantly with every attempt made displace him.

As they started the final lap, the leading group was now 9 as frantic swapping of positions allowed the following group of four riders to close in.

Looking to cling on into the final chicane, Jake was swamped as the pack behind benefited from the slipstream edging Lewis to a hard fought 6th at the flag.

After leading almost every lap, Jake can be satisfied with his efforts in Germany and moves onto the penultimate round of the series in France with a reduced championship lead of 4 points. 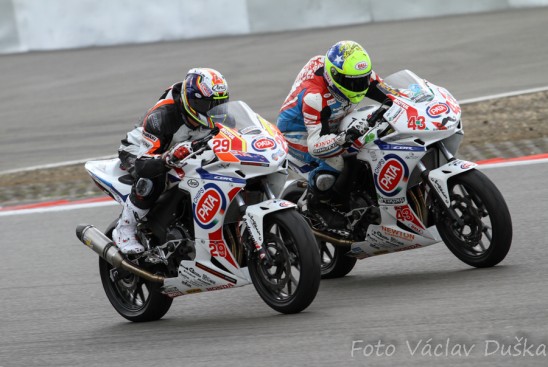