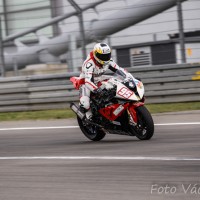 Fresh from taking a debut victory for the H-Moto team at the Panonia-ring, Romanian Robert Muresan took a well earned 19th position on the grid ahead of tomorrow’s FIM Stock 1000cc race at the Nurburgring circuit in Germany.

Muresan, who is replacing the injured Alen Gyorfi aboard the H-Moto BMW again, has impressed throughout the weekend so far, in only his 2nd race weekend on a 1000cc machine.

The Nostalgic Nurburgring circuit, nestled in the Eiffel mountains is however familiar to Robert who has raced here in the past, albeit on a Supersport machine.

Despite the lack of track time on the BMW, Robert improved his lap times in every session, and has every possibility of scoring points in tomorrow’s 11 lap race.

Looking ahead to the race, there are mixed weather conditions forecast near the circuit. If rain does indeed start to fall, this will present another new challenge for the likeable Romanian who is determined to fight hard for a top 15 position tomorrow.