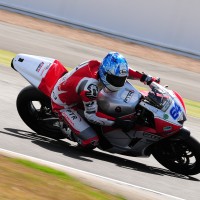 Matt davies recovered from a qualifying crash to grab a respectable 25th position in the 9th round of the wss championship at an overcast silverstone today getting the better of his PTR Honda team mate Nacho Calero and Ivan Clementi (Go Eleven Kawasaki) in the closing stages of the 16 lap encounter.

Davies is by far exceeding expectations in his debut season with the 17 year old former European Junior Cup championship having been close to point scoring positions on more than one occasion.

The tenth round of the championship to Germany and the Nurburgring in 3 weeks.