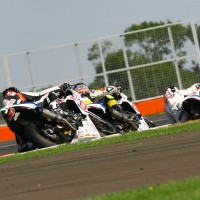 James Flitcroft threw down the gauntlet at Silverstone this afternoon with a blistering lap in the opening free practice session of the PATA European Junior Cup to take to spot by almost a second.

Flitcroft who is a former Red Bull Rookie rider has been finding some pace over the last couple of races and is in a confident mood this weekend.

He may have ended the session with the fastest time but there were a number of mid-session challengers as Javier Orellana, Jake Lewis, and championship leader all staked their claim for the number one spot.

Championship leader Raymond would eventually end up 2nd, a fraction ahead of Orellana who produced his best performance of the season to date.

The battle for the next places was as intense as ever. Augusto Fernandez from Spain took 4th from Hannes Soomer (Estonia) and Hungarian Peter Sebasyten completing the top 6.

Josh Harland was the next of the Brits in 7th ahead of Kiwi Jake Lewis who dropped to 8th.

9th position went to Illan Fernandez, while Stefan Hill impressed with a determined ride to round out the top ten.

The UK wildcards took their time to get used to the new machines with Fraser Rogers (27th) getting the better of Carl Stevens (33rd).