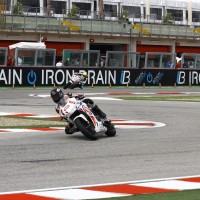 The riders in the PATA European Junior Cup powered by Honda were back in action at Imola earlier today as round of the ultra competitive series rejoined the World Superbike circus for round 4 of their championship.

Imola is an undulating circuit and with most of the riders never having been here before the opening session was even more important than usual in terms of machine set-up for the remainder of the weekend.

Thankfully the rain stayed away giving 32 up and coming riders the perfect opportunity to learn the challenging yet flowing Imola circuit.

Fastest overall by an impressive 0.6s was French rider Guillaume Raymond who put his CBR500ccR into 1st position.

2nd position went to Hungarian Richard Bodis who put in his best result of the season so far, while Kevin Manfredi gave the local fans something to smile about claiming 3rd position overall in the final ten minutes.

Fellow Italian and current championship leader Michael Canducci was 4th less than 0.050s ahead of Peter Sebastyen. Spaniard Javier Orellana returned to form by claiming 6th, the Spaniard looking smooth and determined throughout the 45 minute session.

Josh Harland and James Flitcroft swapped places throughout the session with Harland just beating his fellow British rival to 7th.

The PATA European Junior Cup provides some of the closest racing and places 11 to 15 were split by less than 0.5s. Opening round winner Jake Lewis (New Zealand) was 11th, Andrea Zanelli (Italy) 12th, Illan Fernandez (Spain) recovered from an early session crash to grab 13th, Adrien Pittet (Switzerland) was 14th while Estonian Hannes Soomer showed his liking of the Imola circuit by slotting into 15th.

With official qualifying scheduled to take place in similar conditions and the riders gaining confidence with every lap completed, tomorrow’s session is wide open, although if Raymond can continue in the way that he has started he could be hard to catch.