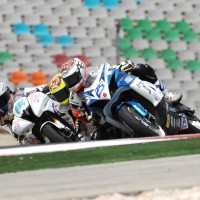 Alex Baldolini was once again inside the points finishers in the 6th round of the World Supersport championship at Portimao in Portugal this afternoon aboard his Suriano Suzuki.

The Italian who was experiencing his 2nd race with his team from last year, made an electrifying start and was soon well inside the top 15.

The early pace put Alex in contention for the top ten as he swapped positions with Roberto Rolfo, Massimo Roccoli and  a group of other front running riders.

A lack of feeling in his arms caused by arm pump mid-way through the 20 lap race prevented a further push and at the flag he had to be content with 13th position and 3 world championship points to add to his 2013 tally.

Alex will now endure an operation to cure the problem ahead of round 7 at the legendary Imola circuit in his native Italy in 3 weeks.