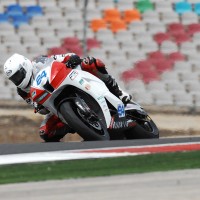 After a career best 17th on the grid yesterday, Australian youngster Matt Davies was as equally fast in today’s 6th round of the World Supersport championship in Portimao, Portugal, missing out on 15th position and his first championship point by just over 10 seconds at the flag.

Matt, who is the youngest ever full time rider in the championship, rode his PTR into a fantastic 17th position after a 20 lap battle saw him get the better of many more experienced rivals including Vladimir Ivanov who he overtook on the final lap.

He was perhaps too steady in the opening laps after not making the best start, but as we have come to expect, Matt is a racer and he proved that today.

Today’s result is not only a great result for Matt, but also for his experienced PTR crew who have been working solidly throughout the season.

The hard work will continue and at the end of the month, Matt will look to claim his first points of the season at the iconic Imola circuit in Italy.