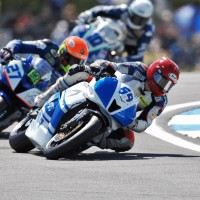 It has certainly been a difficult weekend for the former European Superstock rider who also suffered a crash in yesterday’s final qualifying but with typical Schacht determination, Alex rode maturely to bring his far from perfect Honda home in one piece.

The result was even more impressive given the fact that Alex had to ride with limit electronics.

Round 6 of the World Supersport championship takes place in Portugal at the Portimao circuit in two weeks time.