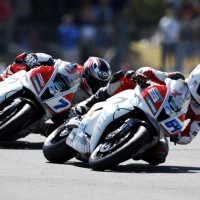 PTR Honda’s Matt Davies retired from the 5th round of the World Supersport championship after an electrical problem halted is charge towards the top 20.

Having struggled on day one, the young Aussie recovered well yesterday and after a decent start was running ahead of his qualifying position.

Matt tried to continue for a couple of laps but in the end he was forced to admit defeat. Nevertheless the PTR Honda team have once again worked well and are looking forward to the next race in Portugal in a fortnight.

Matt Davies – PTR Honda  – “I got an ok start and the race was good until the bike developed a problem in the first half of the race which meant I couldn’t continue. We have worked hard again this weekend and I am looking forward to the next race in Portimao.”