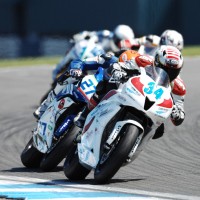 Balazs Nemeth battled hard aboard his Complus SMS Honda to salvage 22nd at the flag in today’s 5th round of the World Supersport championship at Donington Park.

Starting from nearer the back of the grid than was hoped for, the hard charging likeable Hungarian rode aggressively to fend of Denmark’s Alex Schacht at the flag.

It has been a mixed weekend for Nemeth who fell victim to someone else’s accident in qualifying but as we have come to expect Balazs digs deep when it counts.

The team now look forward to Portimao for round six in a fortnight where they are hopeful of scoring their first points of the season.