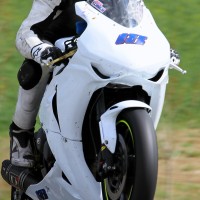 Chris Hower experienced a mixed weekend at Djursland last week after a crash in race two left him sore but thankfully able to finish the final race of the day.

After a 3rd place in morning warm up, the Danish American was optimistic of a strong showing in his three races.

6th position overall in race one meant changes for race two, but a mid race crash in his second outing left Hower battered and bruised. His 7th place finish was very much damage limitation and with three weeks until round 3, Chris has time to be fully back on his feet.

Chris Hower: “To be honest I am quite disappointed with how the weekend went. I was fighting for grip all weekend and in race 1 it almost threw me off a few times. In race 2 I had a huge highside. I am still very sore but I was able to get out for race 3 and score some points, but it was very painful. The crash was the result of the wrong tyre choice but we scored points in 2 races which is very important for the championship. We found the problem and we will be ready for the next race in 3 weeks time.”