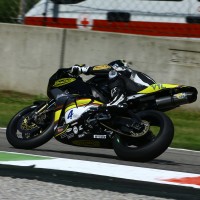 Jack who was 5th in the morning warm up, once again showed his fighting spirit as he powered his CBR 600cc Rivamoto Honda into the top ten until a mistake by the Honda rider ended his race prematurely.

The race took four attempts to run due to a number of incidents on track, but Jack kept his cool until a lap 8 crash saw the hard charging Dubliner crash at turn 13 ending an impressive run of point scoring finishes.

In the 10 lap dash which gave the result, Jack had been impressive from the off, slicing past several riders on the opening lap and was soon circulating in the battle for 6th.

Despite the result today, Rivamoto’s position in the overall classification is still impressive with Jack lying in 10th overall.

Edik Blokhin also achieved an important result for the team, finishing in 26th position at the flag.

Jeremy McWilliams – Team Manager: “All I can say is Jack has once again showed he’s a fighter. There is so much support for him from the team and they all feel the disappointment as much as he does when it ends like this. Jack will bounce back and we are looking forward to Donington.”

The next round of the championship is at Donington Park in a fortnight.