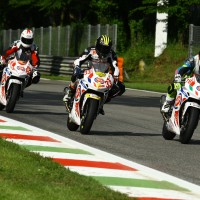 As expected, the 3rd round of the PATA European Junior Cup powered by Honda was a fiercely contested affair with ten riders in with a shout of the victory on the final lap.

The start had been delayed due to some incidents in the Supersport category and so the 34 riders were all keen to get racing.

From the start, the action was unpredictable as several riders fell at turn one. Thankfully several were able to remount and continue.

Pole sitter Guillaume was a little too keen to get going, as was Ilya Mikhalchyk and Adrian Bodis who all received a jump start penalty.

Augusto Fernandez crashed out of the lead on lap 4 leaving a gaggle of hungry riders to battle it out to the flag.

With positions changing faster than the timing screen could cope with it was difficult to keep track with who was dominating as each of the leading bunch all took a turn in charge.

Kevin Manfredi and series leader prior to Monza, Michael Canducci gave the home fans something to cheer about as they each took a turn at the front.

As the riders started the final lap it was Aussie Zac Levy and Lorenzo Garafoli who had moved into what looked like the best position but just like the opening two races, the drag to the flag would decide the outcome.

Ten riders crossed the line almost together, but when the computer had caught up with the frantic pace, Robin Anne was declared the winner by 0.011s from Adrian Pittet and Aragon winner Jake Lewis completing the podium.

Less than 0.5 seconds covered the top ten proving once again that this exciting championship where all riders compete on equal Honda CBR500cc machine is a breeding ground for the future champions.

Fourth place today went to Zac Levy who claimed his best result of the season. Michael Canducci was 5th, retaining his championship lead and James Flitcroft an impressive 6th.

Lorenzo Garafoli was classified 7th at the flag, with Josh Harland, Andrea Zanelli and Ali Adriansyah Rusmiputro rounding out the top ten.

Illya Mikhalychyk dropped to 14th after his penalty while American Alex Wisdom improved massively to claim his first championship point with a spirited ride to 15th position.

The championship has a 5 week break now, with the next race taking place at Imola in June.