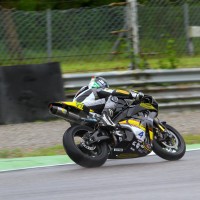 Italy’s Historic Monza circuit plays host to Round 4 of the 2013 World Supersport championship this weekend, meaning another new circuit for Rivamoto’s Jack Kennedy.

Currently 7th equal in the world championship standings, the fast Dubliner has already proved that he relishes the challenge of learning a new track and today’s practice sessions were no exception.

The weather was typical of 12 months ago with heavy rain and dark skies greeting the riders this morning for the opening free practice session in which Kennedy was an encouraging 9th.

This afternoon’s official first qualifying session started in similar conditions with Jack and the Rivamoto team working well to provide a solid base setting should the race on Sunday be wet.

With five minutes to go, and with the sun breaking through the clouds, Kennedy began to post some consistently fast laps elevating him from outside the top ten to a very credible 9th on the provisional grid for Sunday’s race.

The team’s other rider Edik Blokhin was just outside of the qualification maxima but is confident of improving in final qualifying.

The fastest times were sit by the last riders to take flag which gives the Rivamoto team a lot of confidence for tomorrow’s final qualifying session which should be held in much dryer conditions. 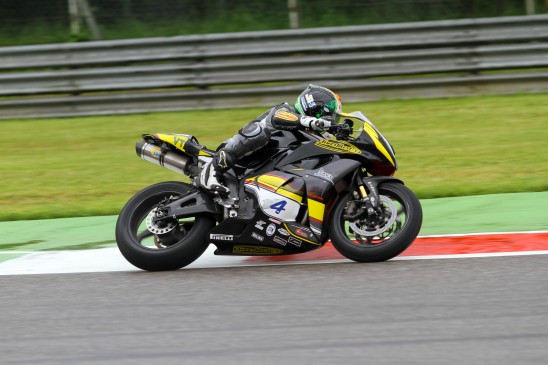 Jeremy McWilliams – Team Manager: “Again we really can’t fault what Jack has done, or his work ethic today. Monza is another new track for Jack but we were in the top ten in both sessions. On one side we need to make some progress with Edik, but on Jack’s side we are sitting quite confident for tomorrow. Jack likes the track which is a bonus as Monza can be quite daunting when you ride it for the first time. We have no complaints and are looking forward to a good final qualifying session with both riders tomorrow.”

Jack Kennedy – Provisional 9th on the grid: “The conditions were really bad. I would have preferred to learn Monza in the dry but it worked out well in the wet, top 10 in both sessions so I’ve got to be happy with that. We were 4th with a couple of minutes to go but someone blew up on the back straight and they red flagged the session so I wasn’t able to complete the lap I was on. I’m looking forward to tomorrow, Monza is a very fast track and I’m enjoying riding the Rivamoto Honda here.”