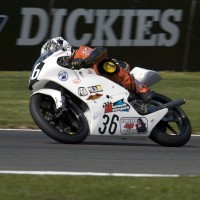 Oulton was also the first race of the year in which Jay would compete under his familiar Rock and Sons Racing banner, so to have such a successful weekend was satisfying for all concerned including former racer and well respected engine guru Ian Emberton who noted that Jayson was one of a few riders competing at this ultra competitive class with a standard cylinder setup. Ian will remain with Rock and Sons Racing for the remainder of 2013.

The weekend started well with Jayson running towards the sharp end in the opening practice sessions. With the sun finally breaking through fully for practice 2,  Jayson continued with his pattern of knocking seconds off of his practice laps ending the first day of competition well inside the top 20.  Jayson also tested a new 125cc spec Pirelli tyre that required modifications to the suspension as well as tyre pressure set up.

Sunday was official qualifying day, and after making several suspension adjustments (compression and rebound) Jayson had qualified provisionally in 13th position out of the 28 riders competing.

Jayson Uribe – 13th after first qualifying session:  “The bike felt stable.  I changed my body positioning to fit the track.  I still am having some front end chatter issues, so we are going to address those for Qualifying 2.  I tried to follow people, piggybacking their lines, and on the last lap I put my head down and gave it everything that I had.  That is when I was able to make my best lap, beating my previous personal best lap time for that session by 0.5 of a second.”

With the warmer conditions for the final session, Jayson was unable to better his lap times and would eventually qualify in 16th position overall for the race.

On Monday, the weather was fantastic, with afternoon temperatures soaring to nearly 16 degrees.  Despite an average start Uribe soon had a group of faster riders in his sights and the hard charging Uribe set about passing them. Riding with a maturity way beyond his 14 years, he kept his head down, evaluating their riding styles, watching for where he felt that he was faster and then made several well controlled passes. At the flag, Jayson had achieved his first top 10 BSB finish with a very encouraging 10th position in the 125cc class and a 13th overall finish in the Motostar class.

Jayson Uribe – 10th position (125cc), 13th position (motostar): “I had few good battles with Taz Taylor and Bradley Hughes.  It was close racing, we were out braking each other and trying to get better drives onto the straight.  I really enjoyed riding with them.” 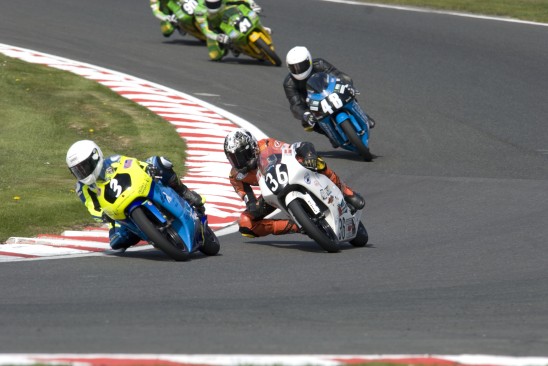 Motorcycle racing is an expensive sport and as the year’s go by the importance of top spec machinery plays an even greater role.  Jayson, who is racing on a shoe string budget and is currently living in Long Eaton with his Mum, is using a converted mail van as his “caravan”, and has to make the most of what he has available.  His motorcycle was shipped over in suitcases in March only to be reassembled in a farm house barn by his Dad. Living proof that desire and tenacity can trump big bucks some of the time if Lady Luck shines your way.

The next round of the Monster Energy British Motostar championship takes Jayson to Scotland and the Knockhill circuit just north of Edinburgh in 5 weeks.