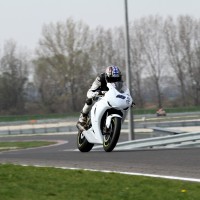 The Solvakiaring circuit played host to the opening round of the 2013 Danish Superstock 1000cc championship and Danish-American Chris Hower currently holds 5th position overall in the standings, not bad for a rider who is returning to full time competition after a lay off of almost 3 years.

Having worked hard over the winter, the Hower Racing Team arrived in Slovakia full of excitement and were keen to show that they are serious championship contenders.

The result was even more impressive given that Chris missed the whole of day one due to a technical issue. He had also never ridden at the circuit before and was lucky to even complete the race after his bike stalled on the grid resulting in a pit lane start and a gap over 6 seconds to make up on the leading pack of riders.

Chris Hower – 5th position overall: “The result was okay considering I missed the entire first day and I haven’t really raced a bike in almost three years. I started the race from pit-lane because the bike stalled on the grid and wouldn’t restart so I had to get a push start which put me 6 seconds behind on lap one. Better results will come at the next round for sure and we have 3 races in one weekend so I am hopeful of making the podium.”