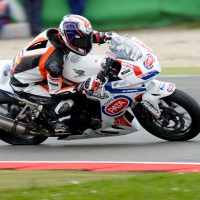 The leader of the PATA European Junior Cup after the opening round in Aragon, Jake Lewis saw his challenge for glory come to an abrupt end on the opening lap of today’s second round in Assen after a lap one tumble saw him unable to add to his Aragon points tally.

The crash comes a bitter disappointment for the likeable Kiwi who returns to the EJC after a season in Superstock 600cc.

Despite today’s none finish, Jake still holds 2nd overall in the championship standings.

Round three of the series takes place at Monza in a fortnight.