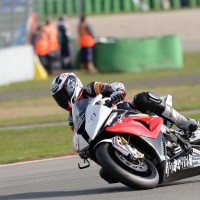 H Moto’s Alen Gyorfi just missed out on his first championship points of the year in the FIM Stock 1000cc Cup at Assen today, a great result in only his second race aboard his new BMW machine.

Having started the season without any pre-season testing  in Aragon a fortnight ago, the Hungarian and his team are pleased to be making such progress so early in the season.

A reasonable start saw Alen mid pack and as the race progressed Alen fought hard eventually finishing the 13 lap race at the Cathedral of Speed in 19th place. Further encouragement for the team is that Alen’s lap time towards the end of the race was as fast as those riders who finished inside the top 12.

The H-Moto team have a test planned prior to round 3 of the championship which takes place at Monza, Italy in two weeks time.