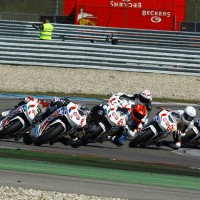 Local wildcard rider ‘bad’ Bo Bendsneijder took a popular victory in the second round of the PATA European Junior Cup powered by Honda at Assen this afternoon.

As in Aragon, the leading positions changed too quickly to keep track of, with Bendsneijder, who had started from Pole, fending off a number of attacks from Guillaume Raymond, Adrien Pittet, Michael Canducci and Kevin Manfredi who all took turns to lead on the final lap.

In the run to the flag it was Augusto Fernandez who proved the biggest challenger as both he and Bendsneijder appeared to cross the line side by side. The photo finish gave the victory to Bo with Fernandez an impressive second. Italian Michael Canducci claimed his second podium placing in as many races with 3rd while Peter Sebastyen from Hungary rode well to take 4th at the flag from Kevin Manfredi and Pole Sitter Guillaume Raymond from France.

Adrien Pittet was 7th, Robin Anne 8th, Javier Orellana 9th and Illan Fernandez who set the fastest lap of the race finishing in tenth position. Ilya Mykhalchyk was 11th less than two seconds from the victory while Riccardo Filippini was a lonely 12th. Josh Harland was the top British finisher in 14th ahead of compatriot James Flitcroft. Spain’s Miguel Aranda completed the points finishers.

Round one winner Jake Lewis was an early faller as was Jesper Hubner both unhurt and ready to battle again in Monza.

With the new CBR500cc machines supplied by Honda making this class one of the most wide open championships within the World Superbike paddock in 2013, the high speed circuit of Monza for round 3 will be a race not to be missed.