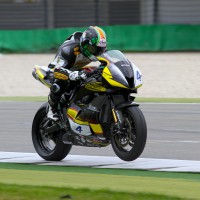 Rivamoto and Jack Kennedy powered to their best ever World Supersport championship qualifying placing with a fighting ride to 4th position in the final qualifying session at Assen, Holland this afternoon. Rivamoto also achieved the accolade of being the first Honda in the field.

The likeable Irishman had looked like securing the final spot on the front row until with seconds to spare Fabien Foret nudged him back onto row two.

The weather today was thankfully dry, but the cold weather was still playing havoc with the grip levels on the circuit. That said, Jack rode superbly in both sessions today giving the team something to cheer about before the race tomorrow.

The team are not only satisfied with the grid position but also with the fact that Jack was putting in some consistently fast lap times which should put him in a strong position in the 21 lap race tomorrow.

Jack Kennedy – 4th position on the grid: “I couldn’t have hoped for a better day than today especially after being in 15th yesterday so to be fighting for the front row today is great. The Honda is working really well and it was a great job by Jeremy and the team. I’m delighted to be up there, obviously disappointed to miss the front row but Foret just pipped us at the end but we have to happy. The lap time wasn’t a one off we have put together some consistent times so we will see what tomorrow brings, but I’m happy.”

Jeremy McWilliams – Team Manager: “I’m delighted with this afternoon’s result. We couldn’t have wished for a better weekend. Looking at Jack’s times he is one of the most consistently fast riders out there which bodes well for tomorrow. We have a set up that he is happy with, the bike is working very well as are the electronics and we haven’t had any issues.  It’s one of those weekends where despite the weather conditions everything has gone smoothly. We are in a good position and the team is full of confidence for the race tomorrow.”

Rivamoto’s other rider Edik Blokhin failed to qualify after a weekend of limited track time and a brake issue during free practice today hindered his progression. The Russian will look to get his season back on track when the championship hits Monza.

Round 3 of the WSS championship will take place tomorrow at 1330 local time.