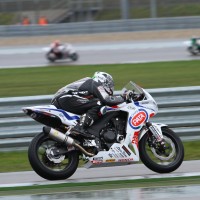 After taking victory in the opening round of the Pata European Junior Cup powered by Honda, Jake Lewis rode sensibly in the free practice session ahead of round two at Assen by setting the 11th fastest time earlier today.

Despite non stop rain for most of the day the skies were seemingly brighter as the riders took to the track for the 45 minute session.

Jake, who has raced at the famous Assen circuit several times before, started steadily and rode with a lot of maturity finding the places where the grip was not so good and leaving the crashing to his main championship rivals.

By half distance, Jake was lapping at a pace to keep him within the top 6 overall but by the time the chequered flag came out he would be classified in 11th position after being overtaken on the timing sheets by a few riders who were pushing very hard in a session which will not count towards setting the official grid.

Qualifying for round two of the championship will take place tomorrow 1330 local time.