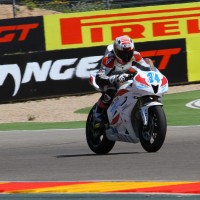 The race went without incident for Nemeth who was involved in a great battle for the full race duration.

The Hungarian finished in 16th position, less than half a second behind Roberto Tamburini giving him a great confidence boost ahead of the next round which will take place at Assen in a fortnight.