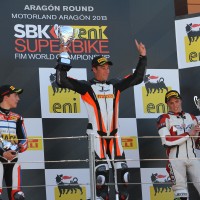 Jake Lewis came out on top in the opening round of the Pata European Junior Cup powered by Honda Motorland Aragon in Spain this afternoon after fending off local wildcard rider Albert Arenas by 0.003 seconds.

Jake, who has returned to contest the full EJC this year took the lead into turn one after qualifying in 4th position yesterday and had to use all of his race craft to keep a pack of 11 other riders behind him.

As always the EJC provided the closest on track action of the day and after being several riders abreast into most turns for the entire race, Jake was understandably delighted to receive the news in the parc ferme that he had taken the victory.

Jake Lewis – “The race was so close with so many fast riders. I want to thank everyone that is supporting me and everyone that has helped me to race here in Europe again this year. This is a great start to the season.”

Championship Standings after the opening race