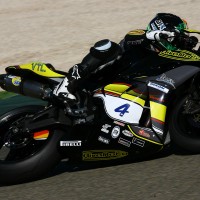 Jack Kennedy qualified in 16th position for the second round of the 2013 World Supersport championship but that didn’t stop the hard charging Dubliner from securing Rivamoto Honda’s best ever result with a fighting 7th place finish at Motorland Aragon this afternoon.

Having struggled to find the best setup throughout the weekend, the team once again found something that worked in the morning warm up session and this, together with Jack’s determined style meant that by the time the race finished he would be heading to Assen for the next round in 8th position overall in the world championship standings.

The team’s other rider Edik Blokhin finished the race in 20th position which was encouraging given that he still hadn’t recovered from a viral infection.

Jack Kennedy – Rider: “I made a reasonable start and after settling into a rhythm I tried to stick to the other guys around me. The group was very close and there were lots of crashes. I didn’t want to get involved in the commotion but I gave it my all that’s for sure and am happy to get seventh after starting sixteenth.”

Jeremy McWilliams – Team Manager: “Today’s result was the team’s best to date. We improved the bike a little in warm up with minor changes and Jack was happy with the set-up. He had a lot on his plate with another new track, with more traction control settings and suspension options but it worked out well. Another great effort on his part particularly in the latter part of the race but as usual he kept his head and is now 8th overall in the standings. Edik finished but struggled in the race. He picked up some kind of viral infection at the test and hasn’t been at full strength. Hopefully Assen will be better for him. Jack knows Assen well so the whole team are looking forward to the next event.”

The next round of the championship takes place at the legendary Assen circuit in the Netherlands in two weeks time.