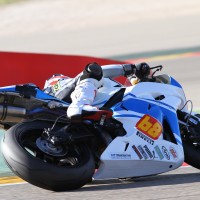 Former European Junior Cup competitor Brandon Kyee has had a solid start to his UEM Superstock 600cc career with Schacht Racing after a spirited ride saw the young Californian finish in a respectable 23rd position in today’s opening championship round.

Having started the race in 29th, Brandon maintained his position throughout the opening lap before slowly working his way up the field.

The youngest rider in the field also took the accolade of being the first of the finishers progressing from the European Junior Cup.

The team are pleased with Brandon’s performance this weekend given the lack of pre-season testing and are optimistic of improving further as the season continues.

Brandon Kyee – Schacht Racing Team: “The race went really well. A few guys fell but I tried to stay out of trouble at the start and then caught and passed a few people. We kept the bike upright and finished the first race which is what we wanted to accomplish. We will look forward now to Assen.”