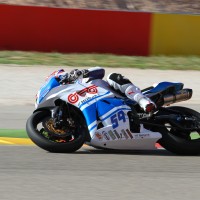 Racing Team Toth’s Alex Schacht has taken a provisional 28th position on the grid for the 2nd round of the World Supersport championship at the Motorland Aragon circuit in Spain.

The Danish rider who finished 4th overall in last year’s UEM Superstock 600cc championship had a difficult time in the season opener but is looking to kick start his debut campaign in Supersport this weekend.

Alex Schacht – Racing Team Toth: “This afternoon’s session was much better than this morning’s free practice where I had some electronic problems. I know I have to be faster but I haven’t ridden since Phillip Island unlike a lot of the other teams so for sure tomorrow will be better for us.”