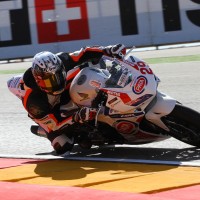 Kiwi Jake Lewis made an impressive start to his 2013 European Junior Cup campaign by finishing 4th in the opening free practice earlier today.

Having returned to the series this year following several outings last season in the UEM Superstock 600cc championship, Lewis was fast throughout the session and looks very comfortable aboard his all new CBR500 machine.

Speaking shortly after the session Jake had this to say:

Jake Lewis – “I changed the set up of the bike from the test that we had last week at Alcarras and it is a major improvement so I am happy and looking forward to qualifying.”

Qualifying for the opening round of the European Junior Cup takes place tomorrow at 1330.