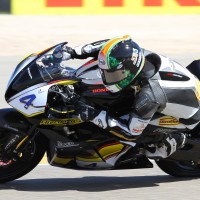 Rivamoto Honda’s Jack Kennedy left it until his last flying lap to take a provisional 14th position on the grid for the 2nd round of the World Supersport championship at Motorland Aragon in Spain earlier this afternoon.

Having started the weekend with the base settings from their previous Aragon test the team found themselves chasing a new setting in both of today’s sessions.

Continuing the form of Phillip Island is something that the team are optimistic of as is the improvement in lap times from the team’s other rider Edik Blokhin who suffered a technical problem during the morning session which cost the Russian rider some valuable track time.

Jeremy McWilliams – Team Manager: “For a while it seemed like we were in ‘no mans land’ and in hindsight we needed a bit more time but Jack dug deep and salvaged something on his last lap. Edik’s bike suffered an oil leak which put him on the back foot but we have made some progress and we go into tomorrow confident of improving with both riders.”

Jack Kennedy –Rider:  “The settings from the test we did didn’t really work so we started from square one again. This morning we moved forward after trying some new things. In qualifying we weren’t really on the pace despite improving our lap time and we were dropping down the order. The last lap was do or die and we managed to go a lot quicker and up to 14th. I got into the 2.03’s which is really good so I am really pleased and know we are going in the right direction with our changes. I just hope for more of that tomorrow.”